The Leader has a Tail 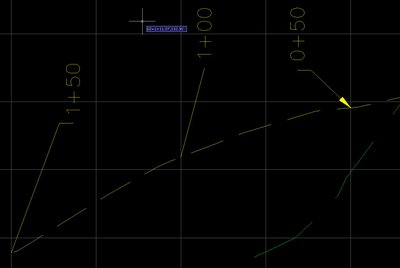 One of the items I clearly recall requesting as a wishlist item involved dragged state leaders for labels that are oriented at 90 degrees (see the 1st and 3rd labels in the image). These two labels have horizontal components at the end of the leader (I will call it a tail). I want that tail to either be oriented the same direction as the label or to not be present at all (like the middle label in the image).

The middle label does not contain this tail. Why?

This was all re-awakened by a discussion in the Newsgroups recently and they came up with the exact same explanation we have been offering. Here it is...

The following discussion is only possible when we do not want an arrowhead as a part of the dragged state leader like the left two labels.

There are two ways to make the arrowhead of the dragged state leader disappear.

1. The first is to set the Leader Arrow Head Style in the dragged state leader to "None". This produces the left most example. Not what I want to see. 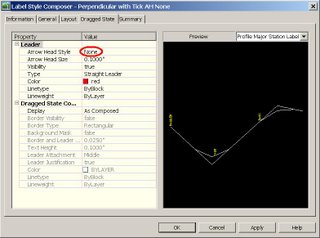 2. the second method is to set the Leader Arrow Head Size to zero. This will not only make the arrowhead invisible it has the added effect of removing the tail to the leader (middle label). 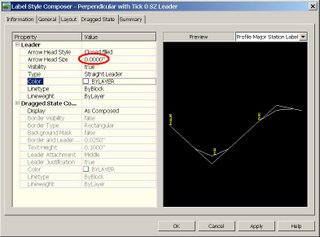 It turns out the Leader Arrow Head Size is directly related to the size to the tail (some have called this a jog or a kink). The bigger the value the bigger the tail.
Posted by Angel Espinoza at Wednesday, August 23, 2006