I received an inquiry and a comment today pertaining to Civil 3D 2010 and the new setting possible to only mask the contour line with contour labels.

This breif video explains what is now possible.

Be Better! ...Hide only what should be hidden.
Posted by Angel Espinoza at Thursday, April 30, 2009 4 comments:

Here is a brief video that shows a couple of portions from the tutorials for Civil 3D 2010's new ability to assign pay list codes to objects and then generate pay item quantity reports.

Be Better! ...Learn to keep good track of things.

Today, Autodesk, Inc announced the Autodesk Assistance Program, designed to help displaced workers. I am sure that you will see and hear much more about this from multiple sources.

The title of this post is linked to the webpage where potential participants can sign-up and then download a 13-month student licence of AutoCAD Civil 3D (or other software), obtain free on-demand training (24-7) via Retrieve Technologies, Inc. vBooks, get information about reduced-cost (or free) classroom training at reseller facilities, and see info regarding getting a certification at an extremely nominal cost.

Be Better!... Invest in yourself and others.
Posted by Angel Espinoza at Monday, April 06, 2009 3 comments:

Take out the Trash

Today, I was pleasantly surprised when I tried the -PURGE command in Civil 3D 2010. While attempting to fix a corrupt drawing that was sent to me, I used this command and found a couple of extra options that I had never seen before (see image below). So I tried the "Zero-length geometry" and "Empty text objects" on the drawing and sure enough it reported that it had in fact removed several such items.

My first thought was, I have to remember to use this on all drawings, one never knows what we have inherited. 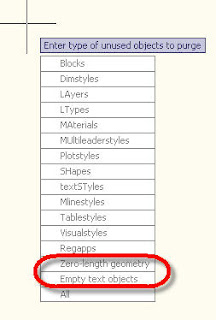 Be Better! ...Clean thoroughly.
Posted by Angel Espinoza at Friday, April 03, 2009 No comments:

Now Where Is It?

For most users one activity that must be addressed when a new version of any product is released is to understand how the user interface has changed. Where are our most commonly used commands?

Civil 3D 2010 now primarily uses a new user interface called the Ribbon. Users that wish to know where the command that they need is located have a new tool called "Where is My Command?".

We can get to this tool from either the "Help" icon pulldown in the extreme upper right hand corner of Civil 3D 2010... 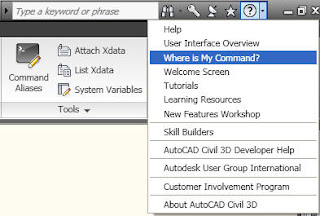 or from within Help itself. 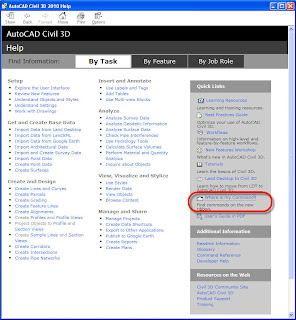 I did a search for the "Import Google Earth Image and Surface" command and was shown exactly where to find it. 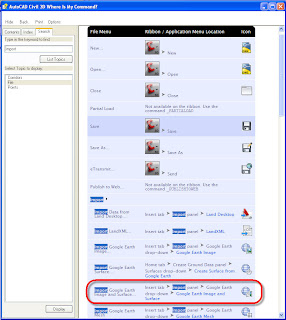 The logic of the Ribbon is very user friendly and finding things the second time is very intuitive.

Be Better! ...know where to find things.
Posted by Angel Espinoza at Wednesday, April 01, 2009 No comments: