In Land Desktop whenever we encountered a scenario like the following image... 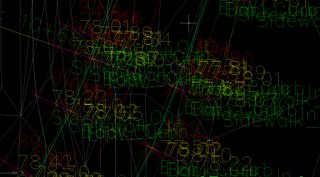 where points markers and/or point labels overlapped we could insert the points in such a ways so as they resize themselves to a percentage of the screen size.

Gregory Newland recently asked in the Civil 3D Discussion Group if he could get the same type of reaction from Civil 3D. He was pointed to a style setting... 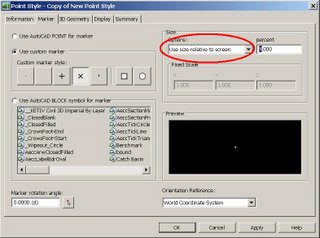 that would allow him to get similar behavior from the point markers, but not the points labels (see image). 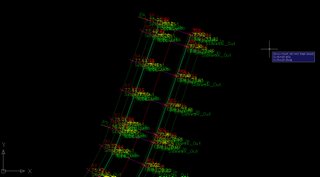 Well, Gregory came up with a workaround. He found that if he maximizes a viewport while in a layout he would get very similar behavior as to what he was accustomed to from Land Desktop. He could zoom around, do the REGEN command and the point labels would also resize themselves per the current zoom magnification (see image). 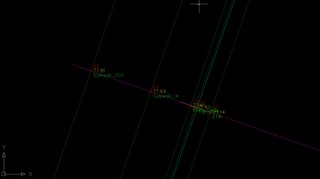 This gave him the behavior he sought.

At this point some of you will be asking "How do you maximize a viewport?" Like most things there are many ways. These may include double-clicking or the right mouse button, but, the simplest to remember is to use the "Maximize Viewport" button on the status bar (see image).

Once maximized press this button again to unmaximize.

By the way, it may be a good idea to create a new layout so that you will not accidentally disrupt any existing viewports.

This process is an example of how a little out of the box thinking can provide users with tools, steps, or prcedures that they find useful. Additionally this demonstrates the value of the Discussion Groups. The insight of one (usually gained through blood, sweat, tears and determination) can benefit many.

Thanks Gregory for sharing!
Posted by Angel Espinoza at Monday, July 31, 2006 No comments:

Last night I ran across two Civil 3D blogs from Hong Kong. They are:

CADBeyond by Eric TSN. This blog has several subtopics. This link is only to the "Land" topic.
Spatial Technology by Andy Chan

I was very happy to find these blogs and look forward to seeing Civil 3D information from other parts of the world.

As Sitelines, a small town engineering company in Maine, attempts to complete a pilot project on time and on schedule, we can keep up to date with their project at their online Journal...

The Chronicles of Civil 3D

If you are contemplating implementing Civil 3D consider this project a good way to benefit from the shared detailed experience of others.
Posted by Angel Espinoza at Friday, July 28, 2006 No comments:

Two Worthwhile Downloads From The UK

Anthony Governanti, Autodesk ISD Technical Marketing Manager, recently pointed someone to one the following documents. I found them both worthwhile. They are:

How to Design a Junction in Civil 3D this one has a separate file called Junction Design.dwg

The second document applies more to 2006.

I was a bit surprised that I had not seen them before.
Posted by Angel Espinoza at Thursday, July 27, 2006 1 comment:

I am not certain why I had not mentioned this before, but Autodesk has a new section at their website where they are making available new stuff under development. Non-disclosure agreements are not required. This makes the technology previews available "public betas" (with all of the disclaimers that go along with that). The new section is called Autodesk Labs.

There are currently three previews available

Project Freewheel Technology Preview - Added July 4th, 2006
Freewheel is both a web site where you can type in an DWF URL for interactive viewing, and a web service that allows you to embed an interactive DWF viewer in your own HTML page.

The main reason I thought to mention this now was that someone asked in a discussion group how to get basic AutoCAD entities into Google Earth. The "Google Earth Extension Beta" would likely work best for him.
Posted by Angel Espinoza at Thursday, July 27, 2006 No comments:

A quick reminder that the Civil 3D webcast schedule for tomorrow at 12:00pm EDT, 9:00am PDT will be the 1st of 4 that will focus on an engineering company's implementation process.

This can be a very good learning tool for those that are considering migrating to Civil 3D in the near future.

By the way, registration is required for this session. Register now so you will be ready. I have just received my confirmation.
Posted by Angel Espinoza at Thursday, July 27, 2006 No comments:

The image indicates that most visitors are from the states of California, Georgia, and Texas (little wonder why).

The worldwide demand for Civil 3D knowledge continues to climb. I would encourage all who are in a position to contribute to the collective learning needed by our chosen industry to do so.

Additionally, I for one, wish to thank all of those who are already making significant contributions.
Posted by Angel Espinoza at Wednesday, July 26, 2006 3 comments:

Autodesk had recently restructured (due to user feedback) how webcasts were shown on the website. They used to be listed in chronological order. The newer format was to catagorize them by subject/topic.

Yesterday, someone requested in the Civil 3D discussion group that it be possible to somehow see the entire list of available webcasts in chronological order also. This way, if we missed a recent webcast it would be easy to find versus having to devine which category it was saved in.

After much input in the discussion group in agreement, Autodesk has made it possible to see the webcasts listed both ways.

Considering that this was just brought up yesterday and today the website has both options available, I think that this is a good example of making requests of Autodesk and them responding quickly. Lets keep this up.
Posted by Angel Espinoza at Tuesday, July 25, 2006 No comments:

How Do You Learn?

Mark Kiker the editor of CADDManager.com (and a former KETIV Technologies co-worker) published the results of a June survey that asked the question...

What is the PRIMARY way you receive training?

Not surprisingly, the majority of respondees (43%) said self teaching was the primary method of learning.

Although self teaching/learning is a critical option (and for some the only option available), when it comes to learning Civil 3D self learning is not very efficient.

If you are considering implementing Civil 3D ask someone who has gone through the process to see if they would have been able to have done it without training. Most would probably say, no.

There are plenty of comments in the discussion groups that attest to this point of view, but I am a strong believer of independent confirmation and recommend seeking unbiased opinions.

Click on the title of this post to see Mark's survey results.
Posted by Angel Espinoza at Monday, July 24, 2006 No comments:

Just a quick reminder that registrations for Autodesk University will begin sometime in August.

Do not let it catch you by surprise.
Posted by Angel Espinoza at Friday, July 21, 2006 No comments:

Clearly, I must have been backed up. I had not posted in over one week and suddenly four post and this.

Either that or I am trying to give Dana a run for her blogging money. Nope, she wins every time. Good job with posting so much info Dana.

It comes down to the training schedule has been going like gangbusters and I found a spare moment.
Posted by Angel Espinoza at Friday, July 21, 2006 No comments:

The Chronicles of... Civil 3D

Coming soon to a theater near you. No, The next Civil 3D webcast scheduled for Friday July 28 at 12:00pm EDT, 9:00am PDT will be the first in a series of webcasts that will be reality TV on your computer screen (only not so cheesey). The series will be co-hosted by Darlene Estabrook, Civil Designer, Sitelines, and Anthony Governanti, Civil Technical Marketing Manager.

Can a small-town engineering firm generate design plans for a commercial subdivision using Autodesk® Civil 3D®? That's the question we'll answer in this exciting new series of webcasts, which chronicle - in real time – the experiences of a Maine-based civil engineering firm attempting to complete a project on time and within budget. Thinking about migrating to Autodesk Civil 3D? Don't miss this insider's look at what it takes!

This series will provide a once a month look at the implementation process.

Sorry I could not help myself.
Posted by Angel Espinoza at Friday, July 21, 2006 No comments:

They attempted to answer and demonstate as many posted questions from viewers at home, I mean at work, that they could fit into one hour.

Clearly a lot was covered. If you missed it, or if you blinked, Look for this webcast to be available soon among the recorded sessions.
Posted by Angel Espinoza at Friday, July 21, 2006 No comments:

When do you visit blogs?

The image above represents the avarage time (Pacific Time) visitors have checked this blog over the course of 24 hours, for the past two years.

8:00am Central and 8:00am Pacific times seems to be most common.

I found it interesting that all hours of the day are well represented. Because this average includes weekends and holidays.

Thanks for dropping by! What time is it?

Statistics curtesy of webstat.com
Posted by Angel Espinoza at Friday, July 21, 2006 No comments:

My apologies to whomever may have a link to this new blog (I do not remember where I first saw it).

A fellow named Kevin (I have a suspicion of the last name but will wait for confirmation) has a new blog named "Land Development Engineering - Thoughts on Civil 3D from an Engineers's Perpective". He appears to be an engineer that has joined the reseller ranks.

Using Civil 3D for large subdivision design which is 21 pages in length. (Note: This paper is particularly interesting for those who have questions about how to organize project data for large projects)

Autodesk Civil 3D 2007 Styles: An Updated Guide to the Fundamentals which is 23 pages long.

Click on the title to get to the white papers download page or click the individual titles to open either white paper.
Posted by Angel Espinoza at Wednesday, July 12, 2006 No comments:

We have a new co-worker here at KETIV Technologies. While explaining to him some of the checks that we run on computers prior to classroom training, I found, much to my surprise, that Service Pack 1 was available for Land Desktop 2007 and Service Pack 1 was available for Civil Design Companion 2007. I had not noticed them when I checked early Friday.

Some may question why mention a LDt service pack on this blog? This would be a good time to reiterate that we do not recommend immediately getting rid of Land Desktop for Civil 3D. There is a reason that both Civil 3D and Land Desktop are in the Civil 3D box. Users now have two tool boxes available to them in order to handle their design tasks. We do not throw away the first tool box (Land Desktop) when we get the newer, shinier toolbox (Civil 3D). We use whichever tool within whichever toolbox accomplishes our needs better and faster. Most often that will be Civil 3D. But, there are occasions that the better/faster tool may be Land Desktop.

"When?" you may ask. One example may be when needing to build a VERY LARGE surface from a LandXML file. Civil 3D may not be able to handle it and Land Desktop may.

Back to the matter of the Service Packs. In the Readme file for Land Desktop Service Pack 1, it mentions that in order for correct side-by-side use of products the following service packs should be installed:

That is probably enough for now.
Posted by Angel Espinoza at Monday, July 10, 2006 No comments: